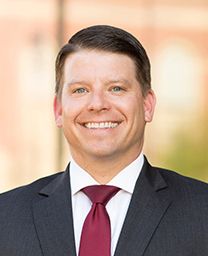 After obtaining his undergraduate degree, Mr. Jordan joined the United States Navy and served on active duty for five years. During his service, Mr. Jordan met his wife and was fortunate to visit many countries in southeast Asia.

After receiving his honorable discharge, Mr. Jordan and his wife moved to San Diego, CA, while she completed her tour of duty. There, Mr. Jordan completed law school. Following law school, Mr. Jordan was first employed as an associate attorney for a boutique workers’ compensation law firm located in his home state of Oregon. Next, Mr. Jordan served as a criminal prosecutor for over six years with the Benton County District Attorney’s Office. There, Mr. Jordan gained invaluable litigation experience having personally tried over 25 criminal jury trials, and countless other motions and hearings. Mr. Jordan was personally responsible for numerous high-profile cases to include manslaughter, robbery, and felony assault cases. Mr. Jordan also gave several presentations to prosecutors at trainings hosted by the Oregon District Attorney’s Association. He also trained prosecutors in jury selection, and direct and cross-examination techniques. Mr. Jordan previously volunteered as a coach for the Oregon State University Mock Trial team for three years.

Mr. Jordan, his wife, and three children enjoy spending time with family, fishing, playing at the pool, and enjoying all that Texas has to offer.

Mr. Jordan received a Bachelor of Science in Economics degree in 2003 from the University of Oregon, and received a Juris Doctor in 2013 from California Western School of Law. He is a Member of the Oregon State Bar and State Bar of Texas.