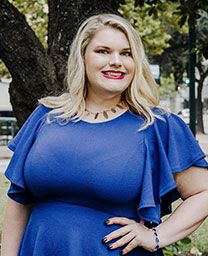 Briana V. Rogers is an Associate Attorney in the firm’s Houston office, focusing her practice primarily on the defense of claims arising under the Longshore and Harbor Workers’ Compensation Act (LHWCA) and the Defense Base Act (DBA).

Ms. Rogers’ prior experience includes an internship at the United States District Court for the Southern District of Texas, Houston Division. During her internship with the Honorable Judge Gray Miller, Ms. Rogers focused on drafting final orders and orally presenting them for approval. She also had the opportunity to engage in numerous discussions regarding evidentiary rulings and trial tactics with Judge Miller.

Ms. Rogers was admitted to the Texas Bar in April 2021. She is currently a member of Houston Young Lawyer’s Association and Houston Bar Association.