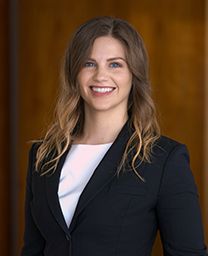 Ms. Todd’s practice focuses primarily on the defense of claims arising under the Longshore and Harbor Workers’ Compensation Act (LHWCA) and the Defense Base Act (DBA).

Ms. Todd graduated from Texas State University with a Bachelor of Arts in Political Science and a minor in Geography. She then graduated from South Texas College of Law where she was on the Board of Advocates and Mock Trial team. Ms. Todd was a finalist at the Closing Argument Competition at Harvard Law School during her last year of law school while acting as President of the Animal Law Society, Vice President of the Environmental Law Society, and Associate Editor for the Texas Business Law Journal.