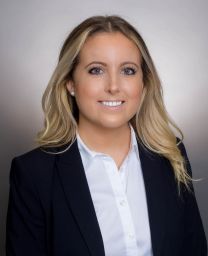 Ms. Lutomski’s practice primarily focuses on the defense of domestic and multinational employers and insurance companies in claims arising under the Longshore and Harbor Workers’ Compensation Act (LHWCA) and the Defense Base Act (DBA). Prior to joining Brown Sims, Ms. House served as a judicial intern for The Honorable H. Frances Stacy in the U.S. District Court for the Southern District of Texas. Ms. Lutomski earned a Bachelor of Arts in Political Science from the University of Houston, and a Doctor of Jurisprudence from South Texas College of Law Houston.

During law school, Ms. Lutomski competed in national and intramural Moot Court and Mock Trial tournaments, has had two works selected for publication in the Corporate Counsel Review, was awarded a CALI award (highest grade in the class) in Family Law, and made Dean’s List for two semesters. In addition, she participated in her law school’s study abroad program, where she spent a fall semester living and taking classes at the University of Aarhus, Department of Law in Aarhus, Denmark.