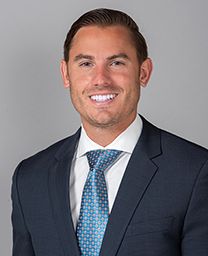 Cody Frank joined Brown Sims as an associate attorney in 2019. Mr. Frank’s work focuses on appellate matters, complex commercial litigation involving products liability, premises liability and maritime law, as well as the defense of claims arising under the Defense Base Act and the Longshore and Harbor Workers’ Compensation Act.

Mr. Frank’s prior experience includes being an appellate and trial support attorney specializing in medical malpractice and general negligence. Mr. Frank has assisted in numerous appellate matters before Florida District Courts of Appeal, Florida Supreme Court, and the U.S. Supreme Court. In addition, Mr. Frank has participated in all phases of a jury trial, including jury consulting, drafting jury instructions, and preservation of error issues. Mr. Frank also has extensive experience representing claimants before social security disability hearings in the administrative forum.

Mr. Frank graduated with a Bachelor of Science in Political Science and minor in Economics from Florida State University in 2011. During summers and gap year between college and law school, Mr. Frank clerked with a law firm where he gained his first exposure to legal practice.

Mr. Frank earned his Juris Doctor from St. Thomas University School of Law in 2015. While in law school, Mr. Frank was on the Dean’s List, a CALI Award recipient for earning top grades in White Collar Crime and Transnational Litigation, a member of two journals—Journal of Complex Litigation and Journal of Student Research, a member of the international legal honors society Phi Delta Phi, and a Research Assistant assisting in intensive preparation for testimony to be given to Congress on the Class Action Fairness Act of 2005. Believing in giving back to the community, Mr. Frank devoted over 100 hours of pro bono services to indigent clients while managing a full course load. Knowing that his legal career would involve contentious disputes, Mr. Frank took classes to earn a Certificate in Negotiation from Harvard Law School and a Certificate in Dispute Resolution from Pepperdine University School of Law.

Mr. Frank is admitted to practice before all Florida and New York state courts, as well as before the United States District Court of the Northern and Southern Districts of Florida.